A deck is the most cost effective way to add living space to your home.

Installation, repair and maintenance for wood, composite and PVC decks.

All aspect of deck design including:

A professional deck design will bring your vision for your outdoor space into reality. Get a design that meets your needs, fits your home and landscape, and meets your local building code. Call our deck contractors today for a deck design to create the deck of your dreams.

Does your home have a deck space currently, but it suffers from broken or warped beams, extensive mold growth, or other such damage? If so, call our deck repair contractors for top-notch deck repair services. Local Columbus deck builders will have your deck beautiful and usable again in no time.

Older decks often suffer from discoloration and fading, as well as wood softening and other such age-related issues. A deck restoration or deck sealing service will have your outdoor space looking like new again, ready for relaxing & entertaining. Get a quote on deck restoration in Columbus today.

Options for Deck Construction in Columbus:

Explore your options for the best decking material that fits your needs and budget. Ask about the following different types of deck materials.

Many homeowners prefer the natural and warm appearance of wood decking for their deck. Popular choices include pressure treated wood, cedar, redwood and Ipe. Wood is a classic choice and can be stained to give you the look you desire.

PVC decking offers the most durability and more options for appearance than composite.  You can get more realistic appearance of grain. PVC deck boards contain no organic material which make’s your deck extra resistant to moisture and weather.

Enhance your outdoor living with the timeless beauty of a natural wood deck. Choose from among many varieties of hardwoods. Wood remains the most popular deck material due to superior strength and decay resistance. Wood decks stand up to the harshest weather, so rest assured that they can withstand even the hottest summer or coldest winter in Columbus.

Custom deck building services ensure a seating and entertaining area that complements your home and offers all the space you need for entertaining or just relaxing in your outdoor space.

Popular wood choices for decks include:

Ready to learn more? Send us a few details so start putting together an estimate.

Why constantly clean and refinish your deck when you could be enjoying it?

One of the significant benefits of choosing composite decking is that you’ll spend way less time on maintenance. A composite deck will not require painting, sealing, or staining like other materials. The deck comes with the color you chose and will maintain its appearance for many years to come.

Composite deck boards stay dimensionally stable and endure exposure to the weather. Just wash down your composited deck at least every other month with a hose to keep it looking new.

Examples of composite decking you may have heard of include Trex and Timbertech.

Get an estimate from our composite deck builders:

FAQS about building a deck in Columbus

Do you need a permit to build a deck in Columbus Ohio?

Yes, you will need zoning approval and you will also most likely need a building permit to build a deck in Columbus, Ohio. Your deck company should handle the permitting process on your behalf. You should review the plan prior to submission.

How much does it cost to build a deck in Columbus Ohio?

The cost to build a deck in Columbus, Ohio will range from $19 to over $50 per square foot. The cost of a deck is mostly determined by the your choice of decking materials. Pressure treated lumber being the least expensive and composite, PVC or hardwoods being more expensive.

Does a deck contractor need to be licensed in Columbus Ohio?

Yes, a deck contractor needs a Home Improvement General Contractor license from the City of Columbus Department of Building and Zoning Services. Applicants for this license must have three years of installation experience and pass the Ohio Home Improvement Contractor exam. If you’re deciding to add a new deck to your home, you might be thinking it’s best to do this in spring or summer. This will be a mistake—the best time of year to build a deck is winter.  This might seem counterintuitive because winter is cold, there’s snow and ice. So why would you

What is the best material for building your dream deck? If you want to add outdoor living space to your property, you have to make sure it fits in with the existing structure and environment because a good deck can last you up to 25 years. The best decking material for your circumstances shouldn’t have 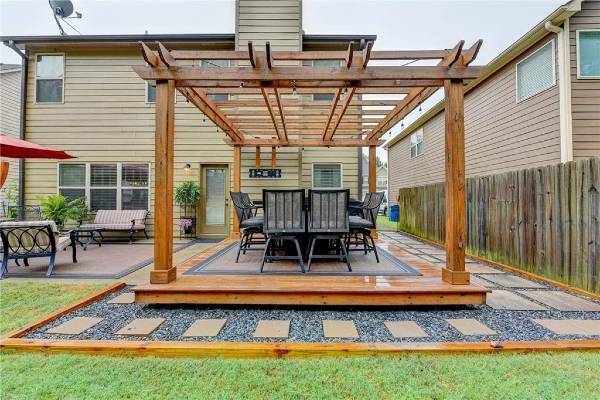 Get estimates on porches and other outdoor living projects.

We connect homeowners to deck builders that serve the Columbus Metropolitan Area. Areas served include:

Every deck will eventually need to be repaired or replaced. With a professional deck inspection find out if your deck needs repair or full replacement. Our deck contractors can replace individual deck boards or the entire decking surface. If your deck frame needs repair you should definitely hire experienced deck builders to avoid a potential deck collapse.

Homeowners who search for deck builders in Columbus Ohio also search for: